Learn more about the neurophysiology of the tremor mechanism. Including information about Central Pattern Generators, Interconnectivity Networks and much more.

The coupon code you entered is expired or invalid, but the course is still available!

In this webinar, Dr. David Berceli, the creator of TRE®, interviews Dr. Riccardo Cassiani Ingoni about how part of the tremor mechanism is generated by Central Pattern Generators (CPGs). Dr. Cassiani Ingoni, Ph.D., earned his Ph.D. in neurophysiology from the Sapienza University of Rome. He worked for six years as a research fellow in the Neuro-immunology Branch of the National Institute of Neurological Disorders and Stroke, National Institutes of Health, the most advanced bio-medical research facility in the United States of America.

The CPGs are localized in the spinal cord and are a unique kind of biological neural network that produces rhythmic motor patterned outputs, even without sensory feedback. The research on CPGs has demonstrated that this network-based rhythmicity does not depend on the nervous system acting as a whole. Instead it shows that that CPGs are actually relatively small circuits of cells that are embedded within discrete portions of the spinal cord and of the brain stem.

Dr. Cassiani Ingoni explains that several types of movement patterns observed in TRE® have typical features of CPG-driven motions. Besides the high-frequency muscular tremors, many other thythmic and cyclical movements patterns observed in a TRE® session appear to be expressions of CPG activation. One such typical pattern is the coordinated undulation of the entire vertebral column that resembles the movement scheme employed for swimming. Another example is the release of the diaphragm through the spontaneous emergence of cycles of contraction and relaxation of this muscle.

Furthermore, in this webinar, Dr. Cassiani Ingoni explains the functions of three different Intrinsic Connectivity Networks; the Salience Network (SN), the Default Mode Network (DMN), and the Central Executive Network (CEN), in the brain and how they are affected and presumably stabilized by the tremor mechanism. Intrinsic Connectivity Networks are networks of areas in the brain where one area is intrinsically connected to other areas, meaning that each area physically has a line of communication with other areas (see picture above). 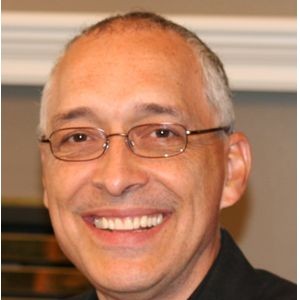 David Berceli, Ph.D. is an international expert in the areas of trauma intervention and conflict resolution. He is the creator of Tension & Trauma Releasing Exercises (TRE®). This revolutionary technique is designed to help release the deep tension created in the body during a traumatic experience or through chronic stress. He is also the energetic and creative founder and CEO of Trauma Recovery Services.

Dave has spent two decades living and working in nine countries providing trauma relief workshops and designing recovery programs for international organizations around the world. He has lived and worked extensively in Israel/Palestine, Sudan, Uganda, Kenya, Yemen, Egypt, and Lebanon. He is fluent in English and Arabic.

David is unique in that he holds a solid academic and experiential grounding in psychotherapy and therapeutic body-work. He integrates that with a keen understanding of the intertwining dynamics of religion and ethnic customs. This combination has allowed him to develop unique and specific processes that enable people from all parts of the world manage and move beyond personal trauma as well as bring healing and reconciliation between diverse groups.

When does the course start and finish?
The course starts now and never ends! It is a completely self-paced online course - you decide when you start and when you finish.
How long do I have access to the course?
How does lifetime access sound? After enrolling, you have unlimited access to this course for as long as you like - across any and all devices you own.
What if I am unhappy with the course?
We would never want you to be unhappy! If you are unsatisfied with your purchase, contact us in the first 30 days and we will give you a full refund.
off original price!

The coupon code you entered is expired or invalid, but the course is still available!